“I don’t think he’ll change. At 21 or 22, so many things appear solid, permanent and terrible, which 40 sees as nothing but disappearing miasma. 40 can’t tell 20 about this; 20 can only find out by getting to be 40.” (Eugene’s letter to Isabelle in The Magnificent Ambersons)

“Nobody knows whether the world is old or young.” (G.K. Chesterton)

In Billy Wilder’s scintillating portrait of Hollywood, Sunset Boulevard (1950), there is a moment where a former star of the silent screen (Gloria Swanson) is outlining the plot of her comeback film Salome to a cynical young screenwriter (William Holden). “The princess in love with a holy man,” she says. “He rejects her. She dances the dance of the seven veils. She demands his head on a golden tray, kissing his cold dead lips.” Comments the screenwriter sardonically: “They’ll love it in Pomona.” It is a vicious reference. On March 17, 1942, the Fox Theatre in Pomona, California was the scene of one of the most notorious previews in film history, that of Orson Welles’s The Magnificent Ambersons. The derisive response of the audience was to trigger a chain of events which was to lead to the cutting of the film by about a third from its original length of 131 minutes. It was an act of aesthetic vandalism whose severity had not been seen in Hollywood since the savaging of Erich von Stroheim’s Greed (1923) nearly twenty years earlier. Welles’s relationship with Hollywood never recovered.

This is a preview of The Magnificent Ambersons. Read the full post (3027 words, 4 images, estimated 12:06 mins reading time) 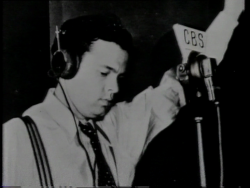 “It’s like meeting God without dying,” said Dorothy Parker on first encountering Orson Welles. Still in his early twenties, Welles’s fame had preceded him: the boy wonder who could read by the age of two; who could quote chunks of King Lear by the time he was seven; who had written a treatise on Nietzsche and published a best-selling book on Shakespeare before he was out of his teens. A voodoo version of Macbeth and an anti-Fascist modern-dress Julius Caesar had established his stage reputation as a stupendously original director. His sensational radio broadcast of The War of the Worlds on Halloween night in 1938 had been powerful enough to provoke mass hysteria on a scale unprecedented for the modern media, either before or since. When at the age of 25, he produced, directed, starred in and co-wrote his debut feature Citizen Kane and it turned out to have the artistry and authority of an authentic film ‘auteur’ before the term had even been invented, there seemed only one possible way Welles’s career could go: down.

When he was asked if he knew at the time he was making an important film, Welles replied with the swagger of the young Kane himself: “I never doubted it for a single instant”. Time has proved him right: Citizen Kane remains the Great American Film against which all contenders must be measured. Yet one cannot forget how closely Welles’s audacity courted catastrophe. In constructing a character portrait so close to the public and private life of the ruthless newspaper tycoon William Randolph Hearst who angrily tried to suppress the film, he came very close to making a masterpiece that would never be shown. Moreover, although the film radiates with the youth and precocious talents of its flamboyant collaborators, most of whom were new to the cinema, it also aches with the central character’s sense of frustrated achievement. It is a film of echo and shadow dominated by a gigantic but hollow man whose life trails into a shadow of what it might have become. Kane is always making promises, but they remain unfulfilled, like his own promise. It was as if Welles was tempting Providence, making a prophetic film of his own possible development. By a curious coincidence both Kane and Welles were to die the same age.

This is a preview of The cinema of Orson Welles: An introduction. Read the full post (1360 words, 4 images, estimated 5:26 mins reading time)