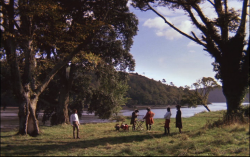 Typically, Kubrick’s style in the film, augmented by John Alcott’s magnificent photography, is daring and unusual. The beauty of the film – in my experience, only Visconti’s The Leopard (1963) can match it for visual splendour – is overwhelming to the point of oppressiveness, because décor and houses reflect the way the characters have become prisoners of their obsession for possession, prestige and position. Rather than standard scene setting, Kubrick often uses a reverse-zoom, so that we see the individual but then pull back to see him in relation to the tangled society of which he is part and which in turn is to entangle him. Some critics thought it a repetitive stylistic device, but I think it works, giving us a perspective denied to the character himself, wrapped up as he is in his own pursuits; it also has the effect of diminishing the character, making him look smaller in the tide of events than he realises and foreshadowing his receding fortunes. Kubrick felt that his story should not be told in the conventional way. ‘Barry Lyndon is a story which does not depend upon surprise,’ he said. ‘What is important is not what is going to happen but how it will happen.’ This will determine not only the narrative structure (the use of the narrator) but also the tempo, a feature of the film greatly admired by Martin Scorsese who loved the way it broke all Hollywood rules of pace.

There is a particularly fine stretch before the end of the first part of the film, which illustrates these facets of theme and style and prepares for developments in the second half. It is the moment when Barry has resolved, as the narrator tells us, to fix on an advantageous marriage as a way of advancing in society. It is then he sees Lady Lyndon (Marisa Berenson) and starts his campaign. When he makes his move on her, it is very formal, rigid, calculated (and must have been fearfully difficult to act) but then these are people of rigid lives and Barry is a calculator: his approach feels as much like a chess move as a surge of emotion. ‘It’s very romantic,’ Kubrick said, ‘but at the same time I think it suggests the empty attraction they have for each other that is to disappear as quickly as it arose.’ An outraged Lord Lyndon (Frank Middlemass, in one of those splendidly over-the-top performances so beloved of the director) cries, ‘He wants to step into my shoes!’, bringing on a consumptive attack that will allow Barry to do just that. Mission accomplished: except that, in a favoured Kubrick tactic, the second part of the narrative is to be a dark reversal of the first. When Lord Lyndon’s son (Leon Vitale) disrupts a music recital by leading in Barry’s son Brian in the young lord’s shoes (‘Don’t you think he fits my shoes very well, your Ladyship?’), it will trigger a shockingly violent outburst that will forever deny Barry’s entrance into high society.

Everything will build finally to a ritualised duel, accompanied over the soundtrack by music by Handel so menacingly orchestrated that it sounds like a march to the scaffold, and probably the most suspenseful sequence Kubrick ever directed. His casting of Ryan O’Neal in the title role was much criticised, but I think O’Neal brings exactly the combination of selfishness and softness to the role that the director required as the upstart hero swindles and seduces his way into the palaces of privilege, only to pay a heavy price for gentlemanly aspiration as he discovers that class rigidity, snobbery, and cruelty lurk behind this society’s mask of elegance.

With every film of his later career, Kubrick took audiences and critics out of their comfort zone and, over ten years after his death, we are still coming to terms with that achievement. ‘Real is good,’ he would say, ‘but interesting is better’. He never made a genre film without elevating and transforming it; the performances in his films look increasingly extraordinary as he encouraged his actors to search beyond naturalism; even his use of music is provocative and challenging. For me, Barry Lyndon is the jewel of his career, a melancholy and majestic masterpiece which, on its own, would justify Orson Welles’s description of Kubrick as ‘a giant’.

Written on behalf of the Keswick Film Society, February, 2010.