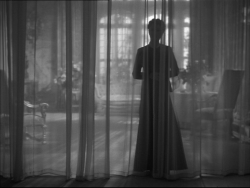 I was tempted to sub-title this talk ‘The Mistress of Romance meets The Master of Suspense’, except that there’s more to Daphne du Maurier than Romance and more to Alfred Hitchcock than Suspense. Actually, to the best of my knowledge, they never did meet, certainly not socially, and there are slightly unusual aspects to this. For example, Hitchcock was actually a friend of Daphne’s father, Sir Gerald du Maurier, who appeared in one of his films, Waltzes from Vienna (1933) and whom Hitchcock described to François Truffaut as ‘in my opinion, the best actor anywhere’. He did want to make a film of one of the Bulldog Drummond stories with Gerald du Maurier; and it is sometimes said that the main character of one of Hitchcock’s early talkies, Murder (1930) – about a distinguished actor who is on a jury that finds a young woman guilty of murder but who then begins to suspect that there may have been a miscarriage of justice – was actually modelled on Gerald du Maurier. (The part is played in the film by Herbert Marshall.) Both of them, incidentally, were great practical jokers and Hitchcock’s most successful one played on Sir Gerald was an occasion when he invited him to a fancy dress party. Sir Gerald turned up in greasepaint and wearing a kilt, only to discover that it was a formal black tie and tails affair, and he had to bid a hasty retreat.