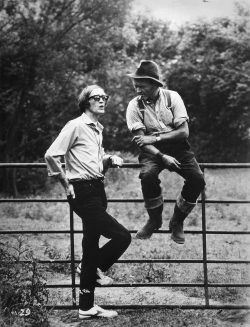 Readers of this short article will be forgiven if their initial response is: “Frank who?” And if they then consult a variety of respected reference sources (e.g. Halliwell, Katz, the BFI’s screenonline website, Robert Murphy’s edited anthology of British and Irish directors, Brian McFarlane’s epic Encyclopaedia of British Cinema) they will be none the wiser, for he is not mentioned in any of them. A BFI Film Forever source cites a Frank Nesbitt who was born in Chicago in 1938 and died in 1990, but he seems to be simply the namesake of the director with whom we are concerned, who was born in South Shields on 27 June 1932 and died in Los Angeles at the age of 74. He directed three feature films in the 1960s and early 1970s whilst he was still in his thirties, but then, to the best of my knowledge, never made another film.

My curiosity in him was piqued when I was researching the career of Carol White for a booklet I was writing for the Network blu-ray release of John Mackenzie’s film Made (1972). I had never seen Frank Nesbitt’s film, Dulcima (1971), in which White co-starred with John Mills and which was considered good enough to be a British entry at the Berlin Film Festival. There is no reference to it in the BFI’s critical anthology, Seventies British Cinema (2008). Gill Plain’s fine study of John Mills’s career in her book, John Mills and British Cinema (2006) contains no reference to Dulcima either, although it seems to me (having now caught up with the film) one of the finest character performances of the actor’s later career. Curiously, Mills’s own autobiography, Up in the Clouds, Gentlemen Please does not mention it.1 Perhaps he thought the subject was a little too close to home: he plays a middle-aged man who falls in love with a woman who is thirty years younger than he is; that same year his daughter Hayley, without her father’s full approval, was marrying a man 33 years her senior, the producer/director Roy Boulting.