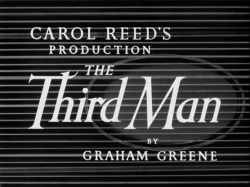 To commemorate the 70th anniversary of the release of Carol Reed’s The Third Man and the 20th anniversary of its being voted the best British film of the century in a British Film Institute poll, I want to offer some reflections on the film and particularly on the character of Harry Lime, who, as played by Orson Welles, is assuredly one of the cinema’s most charismatic villains. A remarkable aspect of Lime’s cinematic durability is that he is only on screen for around 8 minutes or so. My focus will be on those scenes in which he appears and the reasons for their impact. To begin with, however, I wish to ruminate on one of his most striking features: his name.

What’s in a name? 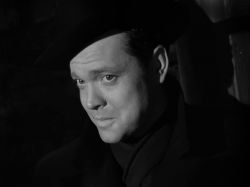 In Ways of Escape, Graham Greene mentioned some of the symbolic interpretations which had been offered about the names of the two main characters of his screenplay, Harry Lime and Holly Martins: for example, how the former had been linked to the lime tree in Sir James Frazer’s classic study of pagan mythology, The Golden Bough (1922), and how Holly was clearly associated with Christmas, so symbolically they represented a clash between paganism and Christianity. Greene could offer a much simpler explanation for what he had in mind:

The truth is I wanted for my ‘villain’ a name natural and yet disagreeable, and to me Lime represented the quicklime in which murderers were said to be buried. As for Holly, it was because my first choice of name Rollo had not met with the approval of Joseph Cotten. So much for symbols.1

This is a preview of LIMELIGHT IN VIENNA: some notes on British cinema’s most charismatic villain. Read the full post (6221 words, 28 images, estimated 24:53 mins reading time)